Global trade of coconut oil during the year 2021 faced some challenges especially delays and higher costs of shipments.  Philippine Statistics Authority reported that during the period of January-October 2021, coconut oil exports from Philippines dwindled to 594,924 metric tons from 721,570 metric tons in January-October 2020. Demand from European countries and USA, the traditional market for coconut oil from Philippines, lessened during the period. Export of the oil to European countries declined from 359,658 in 2020 tons to 291,869 tons in 2021. At the same time, export to US market dropped from 133,864 tons to 122,554 tons. Philippines most likely will experience a downswing in export volume of the oil in 2021. 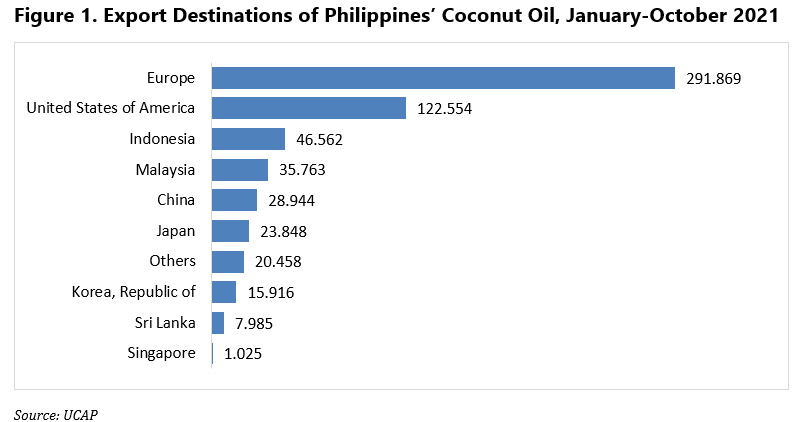 Meanwhile, export coconut oil from Indonesia is recorded a higher volume during 2021 taking advantage of lower export from the Philippines. During the period January-December 2021, Indonesia shipped 611,448 MT coconut oil to global market. The export was 9.8% higher as opposed to the previous year’s volume. Major markets for Indonesian coconut oil were United States, Malaysia, China, and Netherlands.  Export volume to these four countries constituted for more than 70% of the total export. 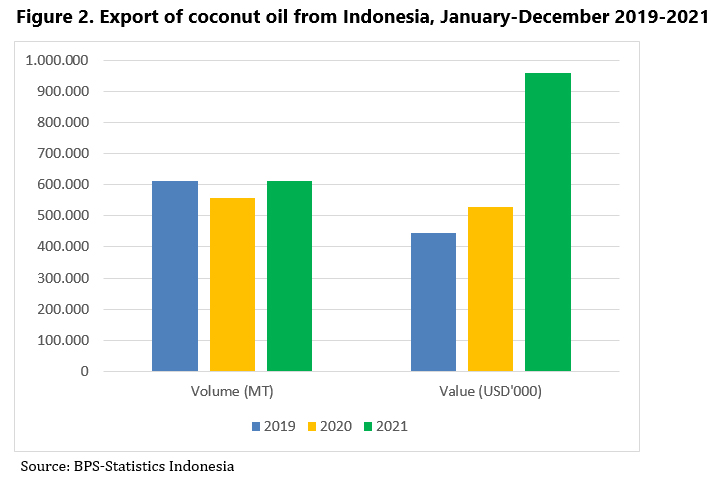 As the global economic is recovering, demand of lauric oils started to improve during 2021. During January-November 2021, US import of coconut oil was recorded a significant upsurge to level of 771,459 MT meaning an increase of 62.4% compared to the volume a year earlier. At the same time, import of palm kernel oil rose by 57.4%% from 290,348 MT during January-November 2020 to 457,126 MT for the same period in 2021.  Hence, total imports of lauric oils by US market rocketed to 1.23 million tons which was 60.5% higher than the previous year’s volume.

An increase of shipments of the oils was also observed in European market. During period of January-August 2021, imports of lauric oils by European countries was 799,682 [m1] which was 2.7% higher than the volume a year earlier. Import of palm kernel oil contributed to the higher import of the oils. Import volume of the oil rose by 8.8% during the period. Meanwhile, coconut oil import by European countries weakened by 1.2% during the period of January-August 2021. Moreover, demand of lauric oil is expected to continue recovering in 2022 following global economic recovery and higher production of the oils. 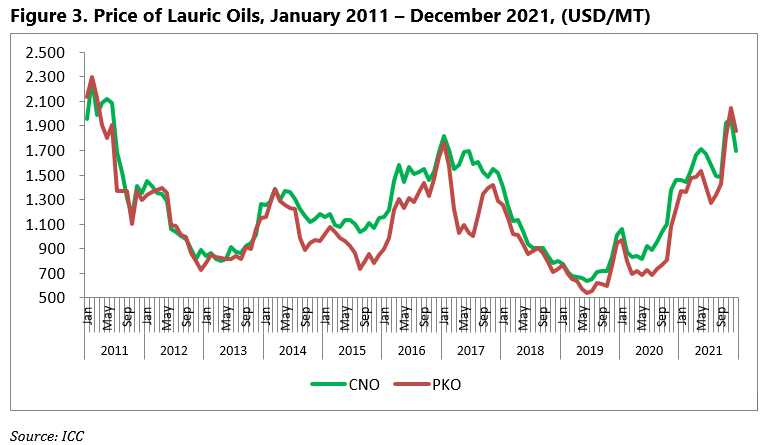